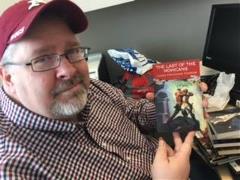 Jeff Linker, a member of UA-PTC's chapter of Sigma Kappa Delta, spearheaded a book drive to provide reading materials to a Texas-based airborne troop serving in Afghanistan. He collected hundreds of items by buying books and soliciting donations from his church, teachers and publishers.

The idea for the project started after Jeff joined Sigma Kappa Delta, the English Honor Society for students in two-year colleges. The club encourages members to be active in service project. Through the website AnySoldier.com, Jeff had learned about the Texas-based troop of about 75 men serving in Afghanistan.

“Their needs specifically said they had nothing to read,” Jeff said. "I thought with me being in the English Honors Society, what better project than to provide them with a library?”

Jeff talked to his club advisors who encouraged him to run with his idea. When the Books-A-Million store in North Little Rock closed in November, Jeff purchased many books on the cheap. He walked away with classics such as Mary Shelley’s Frankenstein, horror stories by Edgar Allen Poe, H.P. Lovecraft’s Classic Stories, Bram Stoker’s Dracula, Homer’s Odyssey, and Jeff’s own personal favorite - The Last of the Mohicans by James Fenimore Cooper.

Being an outdoor enthusiast, Jeff thought the troops might enjoy outdoor life magazines. He put in a request with Grand View Media Group, which sent him four boxes of Bowhunting World and Predator Xtreme magazines. The final collection included works of fiction, non-fiction, graphic novels, comics and magazines.

“I hope this isn’t the only project we do like this,” he said. “I would love for this to be a yearly project for the club.”