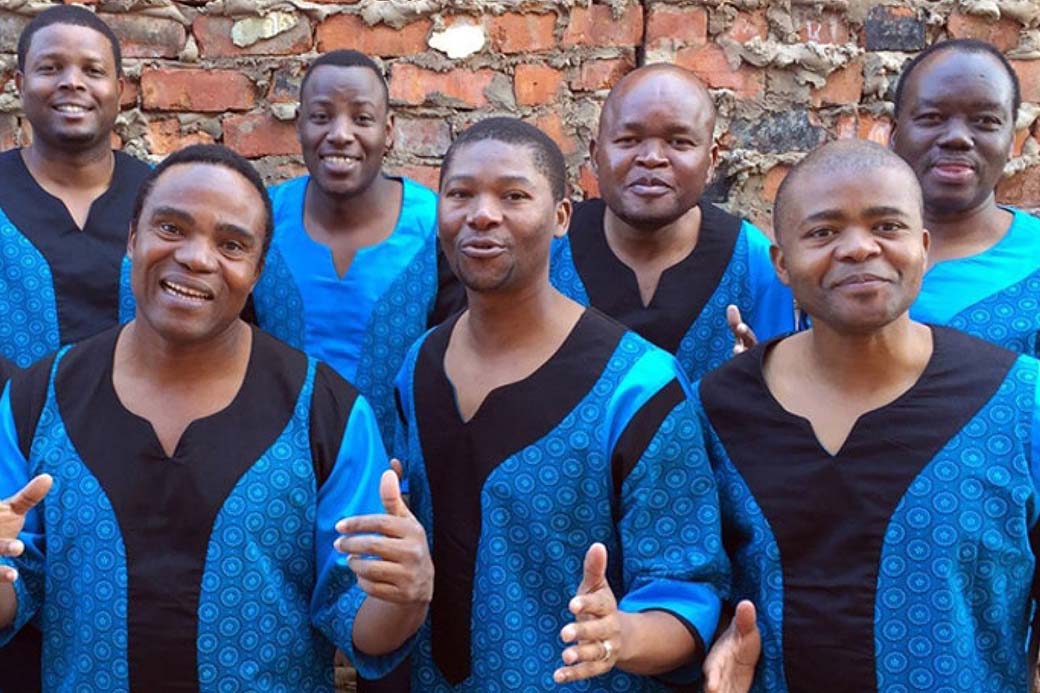 For over 50 years, South Africa’s five-time Grammy Award winners Ladysmith Black Mambazo have warmed the hearts of audiences worldwide with their uplifting vocal harmonies, signature dance moves, and charming onstage banter. With a deep respect for both their cultural and personal history, Ladysmith Black Mambazo are ever-evolving with an eye toward their long musical legacy.

During the 1970's and early 1980's Ladysmith Black Mambazo established themselves as the most successful singing group in South Africa. In the mid-1980s, singer/songwriter Paul Simon famously visited South Africa and incorporated the group's rich tenor/alto/bass harmonies into his famous Graceland album – a landmark recording that was considered seminal in introducing world music to mainstream audiences.

A year later, Paul Simon produced Ladysmith Black Mambazo's first worldwide release, Shaka Zulu, which garnered the group their first Grammy Award in 1988, for Best Folk Recording. Since then the group has been awarded three more Grammy Awards; Raise Your Spirit Higher (2004), Ilembe (2009) and Singing for Peace Around the World (2013), as well as nineteen Grammy Award nominations, more than any other World Music group in the history of the awards.

In addition to their work with Paul Simon, Ladysmith Black Mambazo has recorded with numerous artists from around the world, including Stevie Wonder, Dolly Parton, Sarah McLachlan, Josh Groban, Emmylou Harris, Melissa Etheridge and many others. Their singing voices can be heard in several films including Michael Jackson’s Moonwalker video and Spike Lee’s Do It A Cappella. They've provided soundtrack material for Disney’s The Lion King, Part II, Eddie Murphy’s Coming To America, Marlon Brando’s A Dry White Season, Sean Connery’s The League of Extraordinary Gentlemen, James Earl Jones’ Cry The Beloved Country and Clint Eaastwood's Invictus. A documentary film called On Tip Toe: Gentle Steps to Freedom, The Story Of Ladysmith Black Mambazo, was nominated for an Academy Award. They have appeared on Broadway, have been nominated for Tony Awards and have won a Drama Desk Award.

A favorite of the late Nelson Mandela, Ladysmith Black Mambazo traveled with the future South African president, at his request, when he went to Oslo, Norway to receive the Nobel Peace Prize. One year later they were singing at the inauguration of the newly elected President. After many more special appearances with the South African icon, Mandela proclaimed the group South Africa's cultural ambassadors to the world. Since the world discovered their powerful a cappella vocal from Paul Simon’s Graceland album, the original members have welcomed a younger generation in their mission, passing along the tradition of storytelling.

The Center for Humanities and Arts (CHARTS) is on the University of Arkansas-Pulaski Technical College Main Campus in North Little Rock. Opened in 2016, the 90,000 square-foot facility houses a 456-seat proscenium theater for concerts, theater performances, recitals and other events. In addition, CHARTS houses the Windgate Gallery for art exhibits. The CHARTS lobby and the adjacent Performance Studio are popular rental spaces for receptions and events. For more information, contact Kurt Leftwich, CHARTS Programming and Box Office Coordinator at [email protected] or (501) 812-2831.