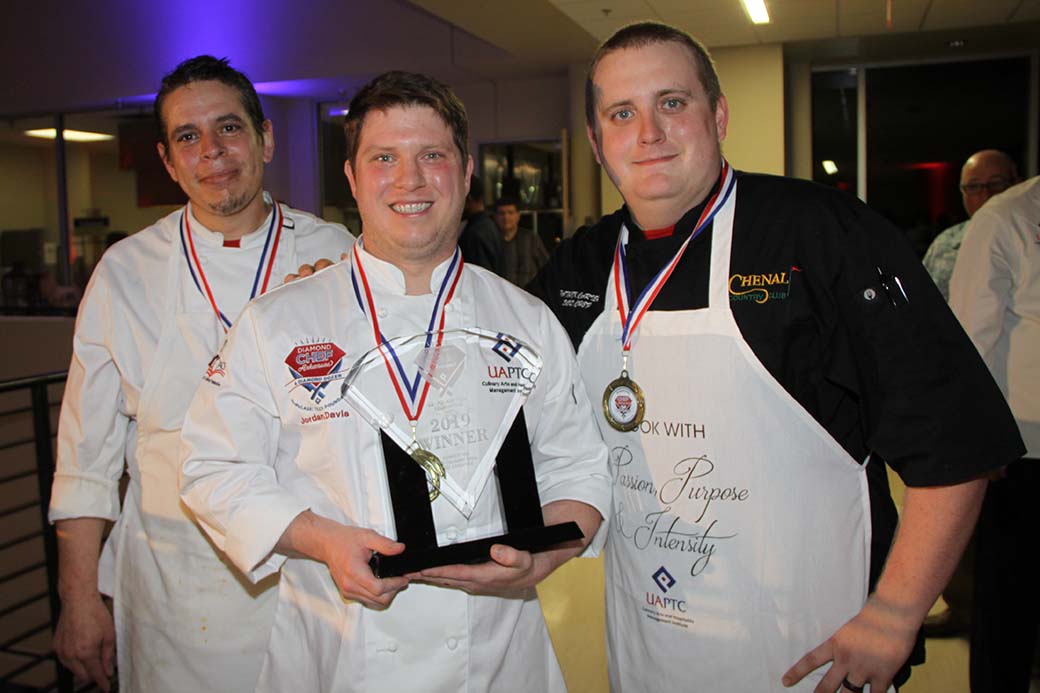 After his defeat in the final round last year by Chef Mary Beth Ringgold, Chef Jordan came back with an attitude of being “in it to win it.”

“It was one heck of a competition,” Jordan exclaimed. “I’m coming back next year to try and win it again and join Chef Ringgold in the Diamond Chef Hall of Fame!”

Only chefs who win back-to-back competitions are inducted into the Diamond Chef Hall of Fame and can no longer compete in the event.

Chef Davis and his sous chef Patrick Carter, also from Chenal Country Club, are both graduates of UA – Pulaski Tech’s CAHMI. Chris Taylor, an assigned UA – Pulaski Tech CAHMI student sous chef, was also on the winning team. All teams in the competition are required to have a current CAHMI student chef participate on their team.

Guests not only enjoyed the fast-paced culinary head-to-head competition, they also were able to enjoy Culinary Creation Stations with themes such as, “The British are Coming,” “Tasting the Titanic,” which served the menu from the last dinner served on the ship, “Sugarland,” and “The Battle of New Orleans.” Other features included “Arkansas Grown” presented by The St. Joseph Center that offered a farm-to-table education room with food samples, local farmers and a live bee display. In addition, were “Hospitality Olympic Games” presented by the Arkansas Hospitality Association, a live and silent auction and signature cocktails.

In its 12th year, Diamond Chef Arkansas is modeled after the popular Food Network shows, Iron Chef America and Chopped. A mystery ingredient - revealed at the start of each round - must be prominently presented in the courses prepared by each chef. The chefs' culinary creations were judged on plate presentations, creativity and taste.

More than 600 guests attended the event and approximately $115,000 was raised overall for the UA-PTC Foundation that will be used to support the students and programs of the college.