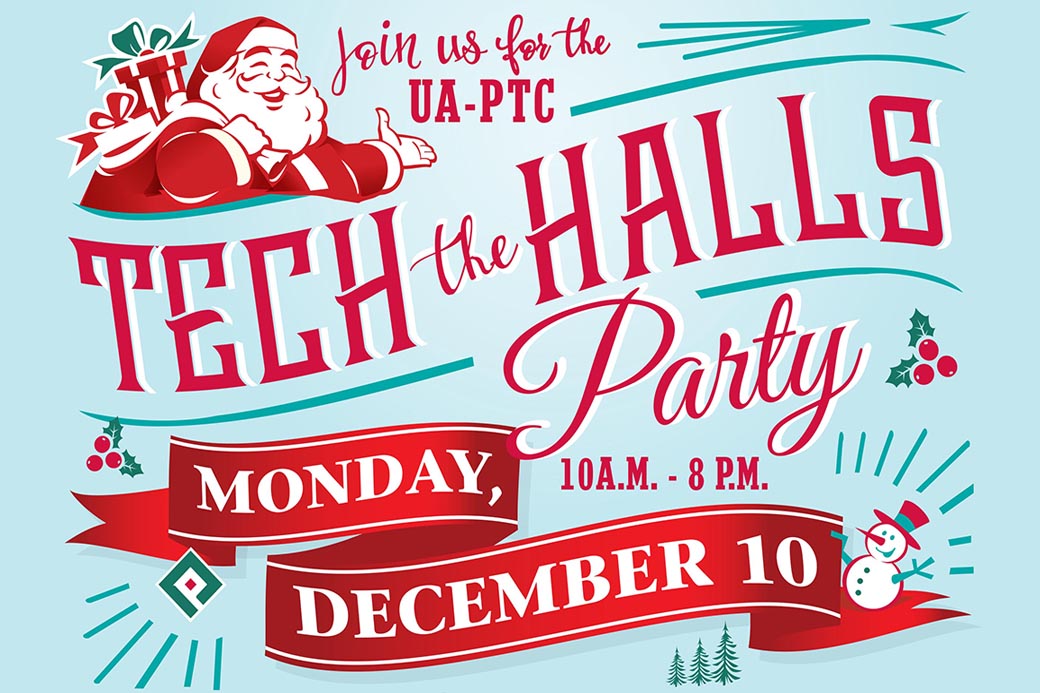 Ring in the season with UA – Pulaski “Tech the Halls” Party!

UA-PTC students, faculty and staff are invited to celebrate the holiday season on Monday, Dec. 10, 10 a.m. – 8 p.m., at CHARTS lobby and theater on Main Campus. All-day movies, photos with Santa, food catered by the UA-PTC Culinary Arts and Hospitality Management Institute- including a s’mores making station- and lots of holiday cheer are sure to get everyone in the spirit of the season.

It’s all free of charge. Bring your family!

The festivities will begin at 10 a.m. with the first screening of comedy favorite Elf, starring Will Ferrell. At noon, perennial holiday favorite The Polar Express will screen. Both films will be repeated throughout the day on the following schedule:

Participants are encouraged to have their pictures taken with Santa Claus from 2 p.m. – 6 p.m. Plus, a holiday costume contest will top off the festivities, so grab your crazy sweaters, reindeer antlers, and elf shoes. You might win the prize!

After conducting a survey of which holiday movie you’d like to see, we chose the top two you selected and decided to rotate them all day long, showing a movie every two hours to accommodate our busy schedules and different locations.

Elf is a 2003 fantasy comedy film, directed by Jon Favreau and written by David Berenbaum, and starring Will Ferrell, James Caan, Zooey Deschanel, Mary Steenburgen, Daniel Tay, Ed Asner, and Bob Newhart. The story is about one of Santa's elves who learns he is actually a human and goes to New York City to meet his biological father.

The Polar Express is a 2004 computer-animated film based on the 1985 children's book of the same name by Chris Van Allsburg, who also served as one of the executive producers on the film. The film features groundbreaking digital animation and stars Daryl Sabara, Nona Gaye, Jimmy Bennett, Eddie Deezen, and Tom Hanks. Film critic Roger Ebert gave the film his highest rating of four stars, saying, "There's a deeper, shivery tone, instead of the mindless jolliness of the usual Christmas movie… It has a haunting, magical quality ..."

Please join us to celebrate the holidays and honor our UA-PTC family!