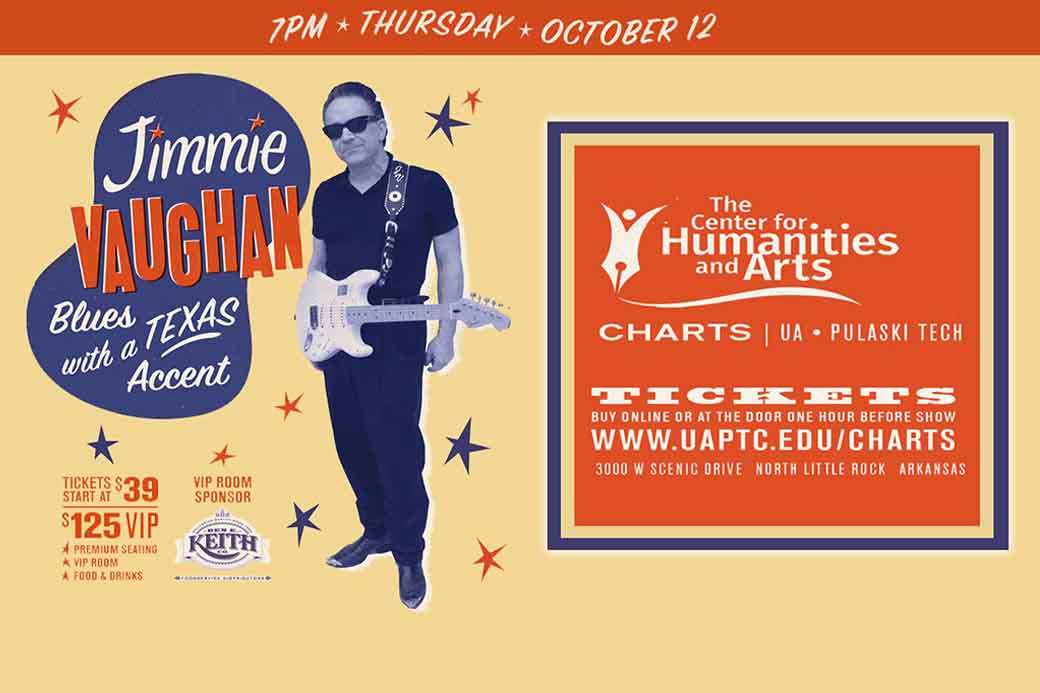 Tickets are priced at $125 for VIP premium reserved seating plus entry to the Ben E. Keith Foods VIP Room featuring free food and libations.  VIP tickets also include VIP parking and a separate private entrance to the theater.  Other ticket prices range from $39 standing room only, $69 and $89 reserved seating and can be purchased at www.uaptc.edu/charts.

Vaughan is heralded as a giant in contemporary blues who maintains a rich sense of tradition while advancing the art in new creative directions. His latest album Do You Get the Blues?  runs the stylistic gamut.

“I wanted to make a romantic blues album,” explains Vaughan. “I was listening to a lot of Sarah Vaughan and a lot of jazz. So I wanted to put my dirty blues guitar and the romantic feelings and the ins and outs of love together on one album. It's got a lot of gospel stylings, it's got blues, it's got R&B. I don't consciously think, okay, we need to put some of this in here; I like that beat, that's cool. I don't plan it out or try to decipher what it is. I just try to create what I feel.”

Vaughan may be best known for his work with The Fabulous Thunderbirds, which he co-founded in the mid-1970s. He recorded eight albums with the band, which brought the blues back into the pop charts and the contemporary musical lexicon, sparking a blues revival that continues today. His latest album features vocals by Texas singing legend Lou Ann Barton, a founding member of The Fabulous Thunderbirds.

Before he left the group in 1990, Jimmie had joined up with his brother, guitar virtuoso Stevie Ray Vaughan, to record Family Style, an album that reflected their mutually deep musical roots and maturing modern artistic sophistication. Then in August 1990, just a few weeks prior to the album's release, Stevie Ray Vaughan died in a helicopter crash in Wisconsin.

After Vaughan's friend Eric Clapton invited him to open a series of 16 concerts at London's Royal Albert Hall, Jimmie started recording his first solo album, Strange Pleasure, which was released in 1994 and won a Grammy for Best Rock Instrumental Performance.

His next album, 1998’s Out There, solidified Vaughan's status as a solo artist, thanks to a Grammy nomination for Best Rock Instrumental Performance for the song “Ironic Twist”.

For more information about the event, visit www.upatc.edu/jimmie