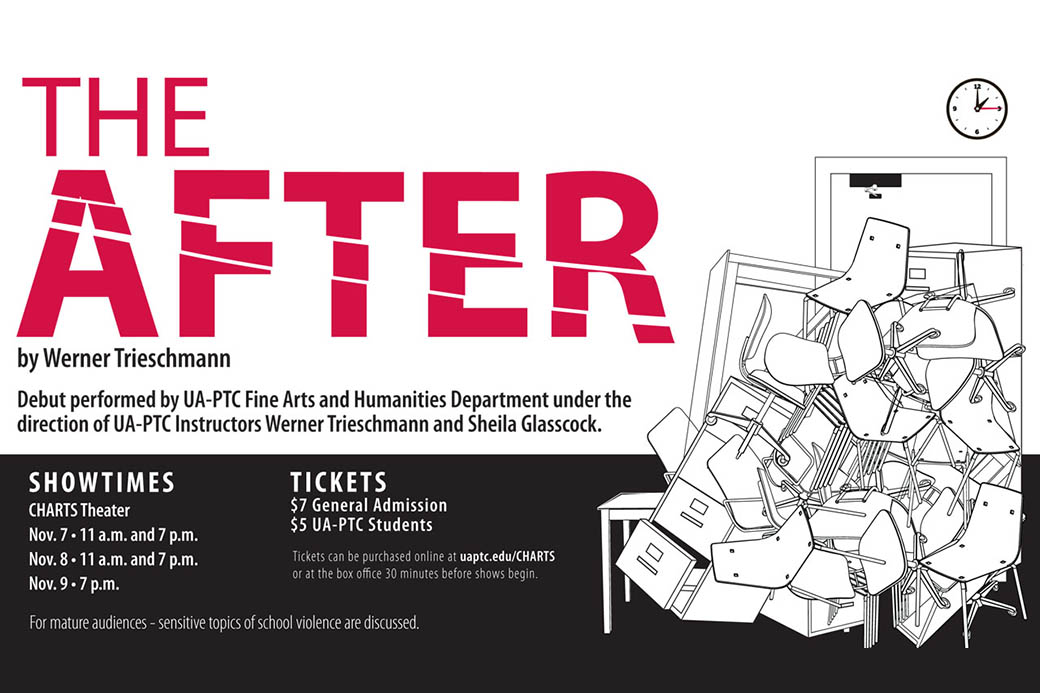 Theater students at the University of Arkansas-Pulaski Technical College will stage a new original work, The After, written and directed by acclaimed playwright and UA-PTC faculty member Werner Trieschmann, Nov. 7 - 9 in CHARTS Theater on the college’s Main Campus.

Show times will be as follows:

The After takes place in and around the Three Roads High School. One bright, blue fall afternoon a shooter walks in Three Roads High School and kills five students and two adults. The shooter runs to a nearby park and kills himself. During the shooting, students in one section of the school – lead by a senior named Candace -- put up a makeshift barrier of desks, chairs, music stands and more. A photo of this barrier goes viral. The After deals with the aftermath of another American school shooting. The hours, weeks and months in the wake of the tragedy are examined. Students and teachers deal with grief, the media frenzy and uncomfortable scrutiny that comes along with this horrible violent event that’s become all too common in the United States.

Tickets cost $7 for general admission and $5 for students. Tickets can be purchased at the door on a first-come, first-served basis or reserved online at www.uaptc.edu/charts. Doors open 30 minutes before show time, and seating is general admission. Run time is approximately 60 minutes.

The work deals with sensitive topics of school violence and is for mature audiences only. For more information, call Debra Wood at (501) 812-2715 or email [email protected].

Werner Trieschmann is a playwright, director and theatre instructor. He was writer and director for the world premiere production of Mozart: Revealed and Schubert: Revealed with the Fort Wayne Philharmonic in Fort Wayne, Indiana. His numerous plays have been produced across the United States, Canada and, most recently, in England, Australia, Japan and New Zealand. His plays including Failing the Improv, You Have to Serve Somebody and The Clawfoot and Hot Tub Interviews have been staged by Moving Arts in Los Angeles, Ensemble Studio Theatre in New York City, The New Theatre in Boston, Mobtown Players in Baltimore and the Arkansas Repertory Theatre in Little Rock. His comedy, All I Really Need To Know I Learned by Being in a Bad Play is one of the best-selling titles for Dramatic Publishing and his plays, Failing the Improv, The Absolute Most Cliched Play in the History of the Entire Universe and others are published by Playscripts. His monologues have appeared in The Best Women's Stage Monologues 1999 and Audition Arsenal for Women in Their 20s, published by Smith & Kraus. In 2013 Trieschmann was awarded an Arkansas Arts Council Fellowship in Playwriting. His play, Lawn Dart, won first prize in the Contemporary Arts Center of New Orleans New Play Competition. He was the first playwright to receive the Porter Prize, an Arkansas literary award recognizing outstanding achievement by an Arkansas writer. He has an M.F.A. in playwriting from Boston University. Trieschmann lives in Little Rock and works as an instructor at Pulaski Technical College, where he teaches theatre, film and scriptwriting and is the director of UA - Pulaski Tech’s Big Rock On the Map Series. He is married and has two boys, who are wilder than wild.