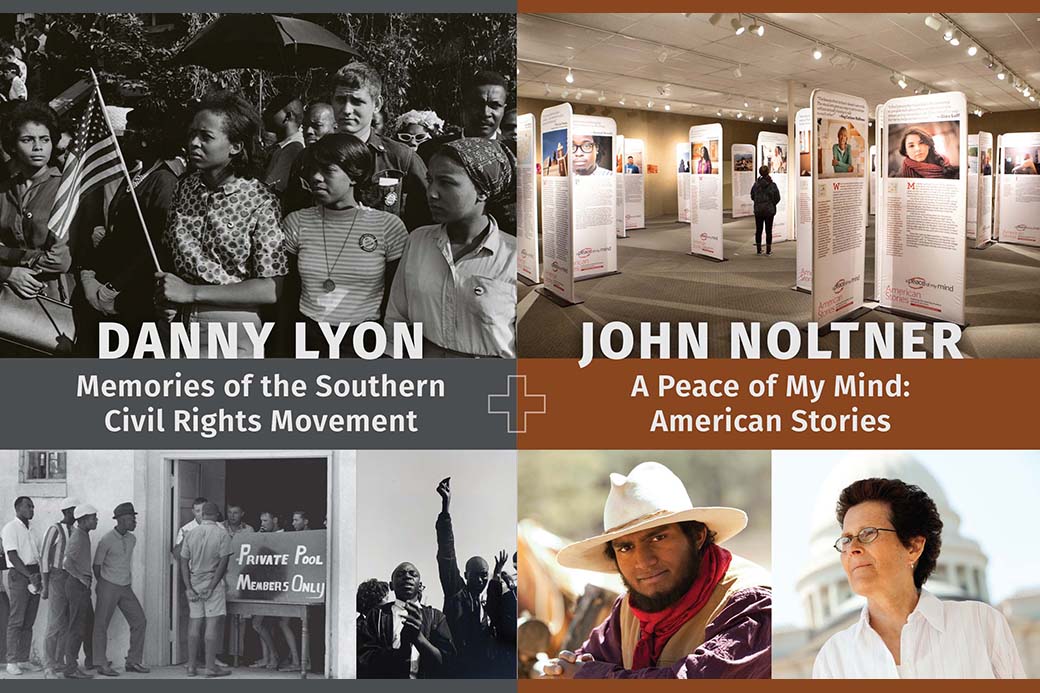 The first, Danny Lyon: Memories of the Southern Civil Rights Movement, will be on display in the Windgate Gallery Jan. 16 – April 14, 2018. The exhibit features the photography of Danny Lyon, who captured some of the Civil Rights Movement’s most compelling moments, from the March on Washington in 1963 to the tragic aftermath of the 16th Street Baptist Church bombing in Birmingham, Al. The Windgate Gallery is open Monday-Thursday 10 a.m. – 6 p.m.; Friday 10 a.m. – 5 p.m.; and Saturday 10 a.m. – 2 p.m. The exhibit is free and open to the public.

The second exhibit, A Peace of My Mind: American Stories, will be displayed in the CHARTS lobby Jan. 26 – Feb. 9, 2018. A Peace of My Mind is a multimedia project centering around the question “What does peace mean to you?” The founder of the project, John Noltner, is an award-winning photographer whose project began as his effort to rediscover humanity in an increasingly polarized world. The exhibit features Kathy Webb, vice mayor of the City of Little Rock and Executive Director of the Arkansas Hunger Relief Alliance. The CHARTS lobby is open Monday-Thursday 7 a.m. – 9 p.m.; Friday 7 a.m. – 6 p.m.; and Saturday 10 a.m. – 2 p.m. The exhibit is free and open to the public.

An opening reception for both exhibits will take place Friday, Jan. 26, 6 – 8 p.m. at the CHARTS lobby, located at the UA-PTC Main Campus at 3000 West Scenic Drive in North Little Rock. At 6:30 p.m. there will be a book signing and remarks from featured speakers John Noltner and Kathy Webb. Live music will be provided by saxophonist Dr. Barry McVinney of the UA-PTC faculty and pianist Tom Cox. The event is also free of charge and open to the public.

In the summer of 1962, Danny Lyon packed a Nikon Reflex and an old Leica in an army bag and hitchhiked south. Within a week he was in jail in Albany, Georgia, looking through the bars at another prisoner, Martin Luther King, Jr. Lyon soon became the first staff photographer for the Atlanta-based Student Nonviolent Coordinating Committee (SNCC), which already had a reputation as one of the most committed and confrontational groups fighting for civil rights.

A giant of post-War documentary photography and film, Brooklyn, NY native Danny Lyon helped define a mode of photojournalism in which the picture-maker is deeply and personally embedded in his subject matter. A self-taught photographer and a graduate of the University of Chicago, Lyon began his photographic career in the early 1960s as the first staff photographer for the Student Nonviolent Coordinating Committee, a national group of college students who joined together after the first sit-in by four African American college students at a North Carolina lunch counter. From 1963 to 1964, Lyon traveled the South and Mid-Atlantic regions documenting the Civil Rights Movement.  The photographs were published in The Movement, a documentary book about the Southern Civil Rights Movement, and later in Memories of the Southern Civil Rights Movement, Lyon’s own memoir of his years working for the SNCC.

More about A Peace of My Mind: American Stories

A Peace of My Mind is a multimedia arts project built around the simple question, “What does peace mean to you?” Founded in 2009 by award-winning Minnesota photographer John Noltner, the project expresses with portraits and personal stories how ordinary people reveal extraordinary insights into how we can work toward common good and create a world that is more just for all.

The stories have been shared at www.apeaceofmymind.net, in two award-winning books, and in traveling exhibits that are installed across the country. A Peace of My Mind serves as a powerful catalyst for community conversations about service to others, civic responsibility, and social change. A compelling storyteller, John Noltner draws on his journey of discovery and the stories he has encountered along the way to lead engaging workshops, seminars, and keynote presentations.